The war against the trucks on the Ho Chi Minh trail was an intense one.  Day and night Fighter planes would be called in to hit targets on the trail, causing huge disruption to the supply line. The NVA though were masters at hiding the trails under the Jungle canopy, which made spotting trucks very difficult, at any time.  Special OPS would do trail watching, but it was extremely dangerous.

The jungle canopy was a hindrance to identification, the photo interpreters could identify activity without seeing it. At the onset of the dry season (i.e., the end of the southwest monsoon), trucks would begin to move and that ever-increasing movement naturally caused clouds of red dust to rise into the air. (You know well the color of the soil.) Eventually that redness began to appear when the dust settled on the tops of the canopy and was easily distinguishable from the prevailing green. This was confirmation of activity under the jungle canopy. SECONDLY, the OV-1 Mohawk aircraft equipped with infrared (IR) capability could detect truck engine heat in concealed truck parks if the canopy was not overly dense. THIRDLY, some of the early parachute-suspended acoustic sensors were dropped in dense jungle canopy. They were capable of hearing voices, truck engines, and other human and mechanical sounds. We often requested the dropping of such acoustic sensors in canopied areas that were suspect.

With all the electronics at the Americans disposal, they came up with an an idea.  They would drop listening devices (code name Igloo White) that would lay on, or bury themselves into, the ground.  Then, they would listen to them from planes above.

It worked, but the NVA also knew of them.  There were stories of the NVA  playing games with the listening devices . It’s claimed they would move the devices, or have trucks drive in circles around the sensors indicating a large convoy in the area.  These claims are not verified, Mark Explains below…

As to NVA counter-tactics. To be effective, seismic sensors were employed in strings of 4 to 6 on open roads (i.e., not concealed) that were straight or relatively straight for a minimum distance. Assuming that the sensor survived impact (the usual case), the more of them and the closer they were to the road, the results could be quite good. If the NVA had located and removed one of the four to six sensors, it would have been readily noticed in the computer-processed printouts. Finally, assuming they knew where several sensors in a string were located, they would never have attempted to drive trucks around them during the day (way too easy to be seen). At night they used the trail to move supplies and in the darkness it would have been extremely difficult to be driving in circles, especially where the roads were narrow and the area littered with bomb craters. Finally, in the book “The War Against Trucks: Aerial Interdiction in Southern Laos 1968-1972,” there was no reference to or mention of such NVA counter-tactics. Occasionally, one sensor in a string would become very active even during the day, and this was attributed to run-away activity and not NVA counter-tactics.

Occasionally, one sensor in a string would become very active even during the day, and this was attributed to run-away activity and not NVA counter-tactics.

I was lucky to meet Mark on a trip down the trail together in 2019. We  drove over the area of coverage on the Ho Chi Minh Trail that he listened to, so to speak. We had a great time although it wasn’t very long, I very much enjoyed his company.

I was a target analyst in the ISC at NKP. I was not one of the aircrew. However, that said, I did fly with them on two occasions – once in January 1969 out of Korat RTAFB and once in February 1969 out of Utapao RTAFB (the wing was temporarily transferred to Utapao while the runway at Korat was being lengthened). Both times, I flew the night-time (18:00 to 06:00), race-track orbit on the south side of Route 9 from southeast of Tchepone (Sepon) to south east of Khe Sanh in South Vietnam.

“ Prior to January 1968, when the seismic (mainly) and acoustic sensor program went live, Road Watch Teams comprised one source of intelligence (aerial reconnaissance and photo-reconnaissance being two other sources) of activity on the Ho Chi Minh Trail in Laos.

[Note: Igloo White, the sensor program, was based in the Infiltration Surveillance Center (ISC) at NKP RTAFB.]

The CIA, to my knowledge, sponsored two major programs in Laos:

Commencing in 1963, the road watch team project received assistance and training from the Thai PARU (Police Aerial Resupply Unit) and Royal Thai Special Forces (RTSF). There were at least two training facilities inside Laos – one on the southern part of the Trail not far from Houei Kong (to the east of Pakse), and another on the northern part of the Trail located to the northeast of Savannakhet (east of Thakhek).

This effort was largely replaced in 1968 by the sensor program”

There were two main organizations involved in the real-time collection and analysis of sensor-derived intelligence of the Ho Chi Minh Trail in Laos.

The sensors were dropped from planes, and this type would bury themselves up to their top and look like a small tree.  Once in the ground the sensor would go to work. Other types disguised as dog turds would lay on the ground and listen, although this is not confirmed.

I do not think that they were ever used in the Igloo White operation (in 1968-1969 covered the area from from Mu Gia and Ban Karai passes south to Muong Phine and southeast to Tchepone and route 9 approaching the border with South Vietnam). I had close contact with the photo interpreters that updated our maps with sensor locations. All of those were of the ADSID (Air Delivered Seismic Intrusion Detector) type and were carefully plotted based on photo and other information supplied by the dropping aircraft. While the PSIDs were hand placed, I never knew or heard of any extensive use of hand-placed sensors on the Trail, especially the heavily used roadway segments. In more remote areas that was certainly a possibility. In the book “Force Recon Command” by Alex Lee (US Marine), the author describes missions conducted by 3rd Force Recon Company in 1969-1970 on that part of the Ho Chi Minh Trail in the Ashau Valley of South Vietnam. Although trucks were sighted and/or heard, he makes no mention of employing any sensor-type devices.

“The operational life of a sensor. In 1968, when the ISC went active, the battery life of a sensor was +/- 90 days. In 1969 (or possibly late 1968) they began using long-life batteries which raised the operational life to +/- 120 days. When sensors in a functioning string were about to expire, a new string was dropped on the same route segment and plotted on our maps. In those cases, there might be 8-10 sensors in the string operating and, one-by-one, the older sensors would expire until only the newly dropped sensors were active. Based on information fed into the computer, all of this was updated in the printouts. This, of course, raises another issue about the NVA finding a sensor and employing counter tactics. While they might find the technology to be useful, if the sensor’s battery had already expired, the removal of the sensor would not have impacted the detection effort”.

Another  gentleman contacted  me with the information below. Thanks John.

“The sensors are dropped from 2000 ft, at an air speed of 508 mph Air speed.  They fall so they are 80 yards apart, which gives the AC130 a decent target area to take out more equipment and personnel. The sensors were also dropped from Helicopters.” 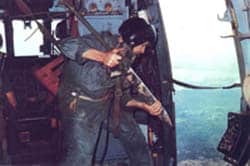 “I was responsible for the safe resurgence of using the sensors more during my tour in SEA 1972. The security module was made of C4 when I got there and several F4s were lost due to premature explosions of sensors being delivered by them. From an Aircraft Radio background, I proposed on day 1 there that it be replaced by an electronic circuit that would make the Sensor codes be destroyed if the enemy dug one up. It was successful and became the total replacement of the old C4 model.

I was surprised to hear that some of these had to be retrieved….

“Well it was a mission to retrieve the sensors built without codes or protection from enemy stealing our technology. No camera brought along. I’m sorry but it was rushed as quickly as possible to avoid enemy contact. Unfortunately they were closer than we thought because once we got airborne and I was told I could practice flying this Huey is when a burst from a hand held weapon killed the pilot instantly leaving me panic stricken and unsure of where I was heading.”

Enjoy this post? Find the rest of our Ho Chi Minh Trail Tales here. Interested in riding in Laos, but looking for  more adventure and less history? Check out our Laos ADV Tours page.